PRO176 was born on July 29, 1976 in Paris, and grew up in Choisy-le-Roi, a small town in the southern suburbs of Paris. At the age of 5, he began to draw on his own, by copying the characters of Jack Kirby, famous American comic-book designer. The comics from across the Atlantic, which his mother bought for him at the time, will be his first readings and will influence him forever. He continues to draw, also out of boredom, too little leisure in the suburbs, not always the financial means to reach Paris, « where everything happened », the violence of the neighborhood and the blocked horizons were not just one myth. It is by observing one day, the technique of the 2 graffiti-artists Mode2 and Colt, then on the poster of the festival « 89 young people for equality » in 1989, that the young Pro has the revelation and decides to dedicate his life to paint.

In 1991, he stole his first classic, SprayCan Art (the Sacred Book of graffiti), now « contaminated », the krylon is definitely running through his veins. Working on letters and style to show it as much as possible became the priority, school was quickly replaced by appointments to go to practice on walls and all the other visible supports possible. Academic artistic education is refused, « because of poor general grades ». In 1996, he joined the ranks of the infamous and famous Grim-Team. The following year, renamed « PRO 176″, he participated in the founding of the UltraBoys International group. With Gold Jaba, Sozyone, Kool Func 88, Byz, Shake and Kool Recto, they claim a new form of graffiti, an aesthetic still imbued with Marvels, futuristic abstract mathematics, alphabetic constructivism and facial Picassonic cubism, brutally refined. A sort of Pure Graffiti Avant-Garde, ignoring any other view of graffiti, supposedly unnecessary.

It was in 2010 that he joined the RTZ (Return To Zero) group, based in Berlin, Germany, other revolutionaries of the futuristic letter in Europe. Music, rap mainly, is another major influence of his life and will carry him from 1992 to 2010, to collaborate on many projects with different artists, to produce 3 albums (Le Cri des Bricks, Vocabulaire Granit, and Galactick), and on stage, with more than 500 concert dates in France and internationally, including 2 dates in the legendary Olympia. It claims a style inspired by the universe of Kirby, whose eternal philosophical quest for good against evil is played out against a backdrop of a universe with infinite stars and galaxies, populated by superheroes or super-villains,  » after all the universe is vast just like the creatures which must inhabit it ”. Big futuristic machines and other ships straight out of a science fiction film, on which he has largely drawn on since childhood, as a true fan of the 7th Art, often appear in the decor, his letters are worked on. extreme and always fit together perfectly in this astral-galactic universe, where the obvious anatomical features of his characters mingle with the palette of vivid colors, often represented in his work. More recently, large colorful abstract figures have appeared, outlined in black, like a comic book bubble, where one or more eyes seem to be watching you. « The eye that sees … everything but which can also deceive us » about the hidden meaning of things, their real meaning, everything is a matter of interpretation.

When he met SEEN in 2009, he was looking for a studio so that he could paint elsewhere than on the « front door of my house ». The contact is made naturally with the « Godfather of graffiti », a collaboration with the Seen Studios is quickly born, the chance wants that younger, he was influenced by the chapter of the latter, in SprayCan Art and 20 years later , they work side by side. At his side, he will learn the handling of the brush and the use of acrylic, his work will benefit from an even more successful result thanks to this new technique. 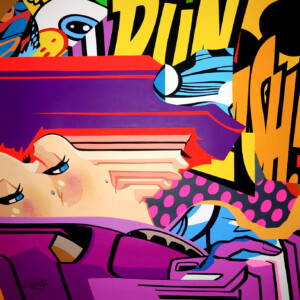 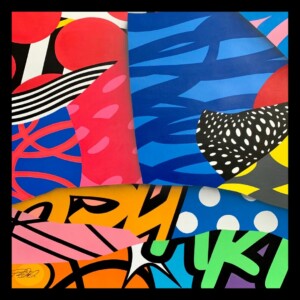 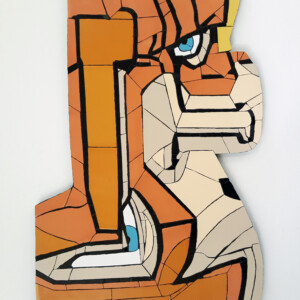 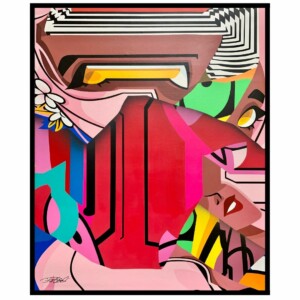 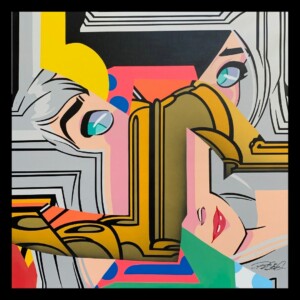 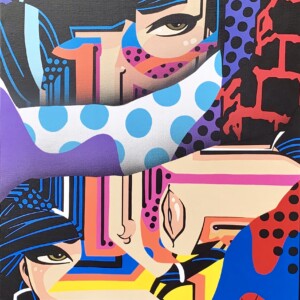 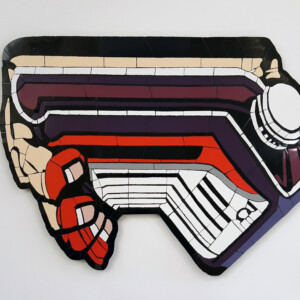 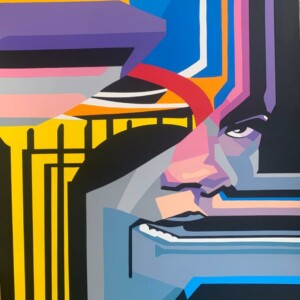